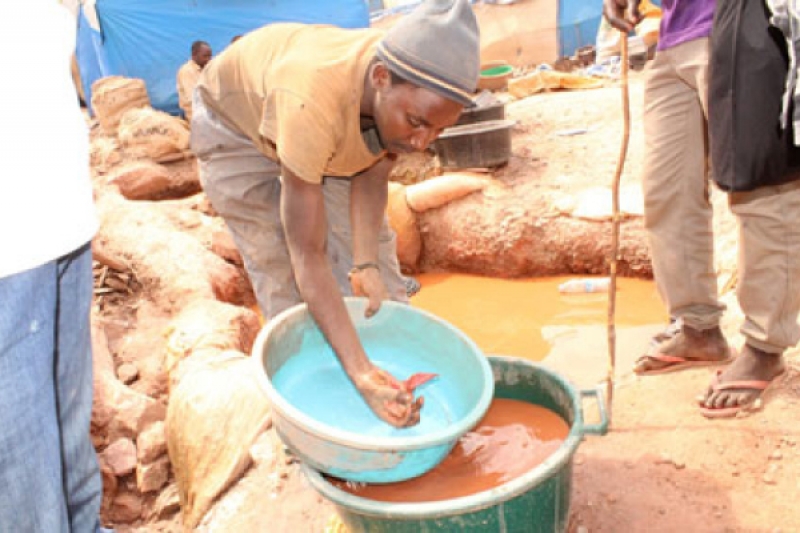 That is the state of more than 100,000 artisanal gold miners who were evicted from several gold mining areas in Kitumbi Sub-county, Mubende District in September last year.

The booming artisanal mining business came to a halt when security forces descended on the mines, instructing them to vacate the mines where they had operated for almost three decades.

The residents were given two hours to vacate the mining villages by a combined force of police and military personnel.

The operation ushered more than 80,000 people into poverty, leaving many scattered in different parts of the country without a source of living.

Mr Joseph Luweesi, who went to the mines about 20 years ago as a casual labourer fetching water used in the rudimentary processing of gold, had graduated to a shop owner.

He values the shop-by the time it was looted at Shs12 million.
“I could not save any of these items within two hours because they were bulky,” he says.

Mr Luwaasi now roasts beef on the main street in Kasanda, a small town with no tarmac road. On a daily basis, he sells two kilogrammes of roasted beef, making a profit of about Shs4,000.

“My family members in Bakka-Wakiso District are stranded because the money to sustain them used to come from the businesses in the mines,” he said.

Mr Francis Bisangwa, a former gold trader under Mubende Trust Gold Buyers and Traders Association, says he lost Shs60 million worth of merchandise in his retail and wholesale shop in the mining area.

His commercial building housed the shop and other accommodation units was also demolished.“That is how the Shs25 million I spent to construct that house was lost within minutes,” he narrates.

“That house was demolished four months after being constructed. When people were being evicted, others used that opportunity to loot everything in the shop,” a devastated Luwaasi says, adding: “I am struggling to put food on the table.”

The former gold miners are now forming a social movement in a quest to fight for their economic rights.

According to Mr Ivan Mpagi, governance officer in charge of extractives at Action Aid Uganda, this is a human rights based approach to development using the core pillars of empowerment by raising people’s conscience, solidarity through building movements and networks to address the injustices being perpetuated by big players in the mining sector, building around the networks to move the action to governments.

“If you don’t claim your rights, the government thinks you are fine in Mubende. Yet the mines where you used to earn a living were closed,” Mr Mpagi said in Kasanda town last week, during the first training session on how artisanal miners who were evicted from gold mines can fight for their interests as a group.

The more than 16 associations of gold miners, traders, money lenders, transporters and food vendors intend to use social media platforms such as WhatsApp, Facebook, Google+, among others, to demand for their reinstatement in the mines.

They intend to operate under Mubende United Miners Assembly.
Action Aid Uganda believes the evictees can use social media to air their plight.

Mr John Bosco Bukya, the spokesperson of Singo Artisanal and Small Scale Miners Association, says about 60,000 people are expected to join the social movement to demand government to allow them return to the mines.

Mr Bukya who lost several drilling harmers, a gold processing centre, two boil mills valued at about Shs300 million during the eviction, says the artisanal miners can co-exist with AUC Mining Company owned by Ms Gertrude Njuba and her associates.

AUC Mining is the company that has the Exploration Lease for the 207.8 square kilometres of land that covers Kitumbi Sub-county where the mines are located.

The company that was formerly known as Gamestone International, successfully petitioned government and President Museveni that the artisanal miners were illegally mining in the area yet they had no formal permission and were evading taxes.

“That is the company that claimed we were there illegally. Yet in 2015, the State Minister for Energy and Mineral Development, Mr Peter Lokeris advised us to form an association and get a location licence within the exploration area,” Mr Bukya said.

He said after being evicted, they realised that the government did not have the political will to give them a location licence after applying for it and holding several meetings with various government officials.

President Museveni advised the artisanal miners to relocate to the nearby 10 square kilometre piece of land in Wakayiba.

However, the miners say the land has ownership challenges since the government did not buy it from owners who have homes and gardens on it.

“Taking us to an area where government did not buy that land is suspect,” Mr Bukya says, adding: “That land has no history of mining. The ministry has no report that that area has any mineralisation. They have never carried out any geological survey. It is only good for agriculture.”

Mr Bukya said they asked the President in a November 2017 meeting to devise means of taxing them.

He said on the black market, a kilogramme of gold was going for Shs120 million.
Kasanda Sub-County Chairman Isaac Kamulegeya said since the closure of the mines, about 7,000 residents of the sub-county have no source of income. This is because most of them had sold their land to set up businesses in the mining areas, nine kilometres away.

“Most of these miners are young people who can resort to crime and prostitution to survive,” he says.