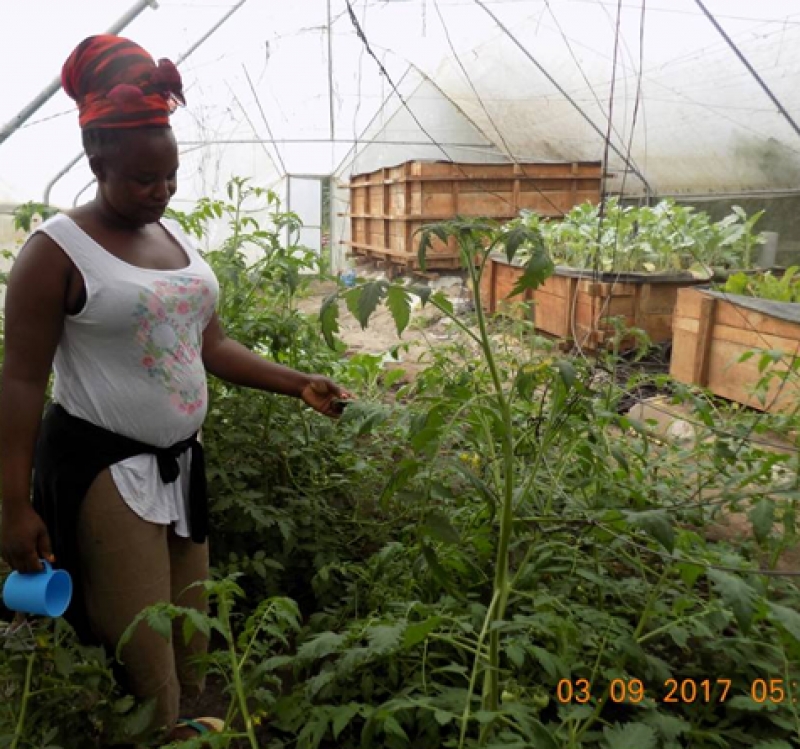 I am very thankful to the project; it has contributed significantly to improving the lives of my family-Norah Maridiyo

33 year old Norah Maridiyo lives in Malipupu, a remote village in Adjumani district. Adjumani is one of the districts in the semi-arid northern part of Uganda with a height between 1356-1524m above sea level, a precipitate of 400-600m litres and temperatures above 30 degrees centigrade .Water scarcity is a big problem in this district as it is far from the main water source the River Nile. The district is also still recovering from decades of conflict posed by Kony rebel forces and is host to hundreds of thousands of refugees from neighbouring South Sudan and the Democratic of Republic Congo.

However, it was not all smooth sailing as she had anticipated. She faced some challenges in managing the Aquaponics system.

“The system was installed at my home in the dry season and there was a problem of water scarcity which made it difficult to change the water and also the rate of evaporation of water from the system was high” says Ms.Maridiyo.

Also, she had not mastered the techniques of managing the Aquaponics system well at the time.  “It was a gamble for me; I wasn’t sure when to feed the fish and the quantity of feeds to put in the system”.

This led to poor yields from the fish .she harvested only 78 fish though the crop yields were good.

Nonetheless, this did not discourage her in fact the money earned from the fish sales and the good yields from the crops made her realise that it was a profitable venture, and that fish was on high demand. She then decided to dedicate time and learn more about managing the Aquaponics system with the support of the WGI project staff and the farmer guides.

Ms Maridiyo also installed additional two aquaponics systems. In June this year, she again received 1,763 fish fingerlings and collard greens, tomatoes and spinach from WGI which were placed in the three systems. Her efforts are already paying off.

“I have so far had good yields from the vegetables which has earned me Ugx shs.160, 000 that I will use to buy fish feeds. I’m also hopeful that I will get good fish yields because most of the fish currently weighs 350grams at just 3months.” Says Ms Maridiyo.

She was also contacted by Zawadi hotel who have become her biggest customer for her fish and vegetables.

“I am very thankful to the project; it has contributed significantly to improving the lives of my family- they now eat a balanced diet from the fish and vegetables .I am also able to earn money and contribute meaningfully towards my family’s needs ” She says.

She has also become a model farmer in her community. People keep flocking her home for training on how to set up and manage aquaponics systems as an alternative farming method and business investment option.

Mrs Maridiyo is one of the many farmers in Uganda who have benefitted from the WGI three year project aimed at promoting commercial Aquaponics farming among smallholder farmers/households for water efficiency, food security and livelihoods improvement. Adjumani was chosen as one of the project districts due to the high poverty rate and huge influx of refugees in the district.

Listen to her testimony Here