Court Rules, Chevron Must Pay for Environmental Damage in Ecuador. 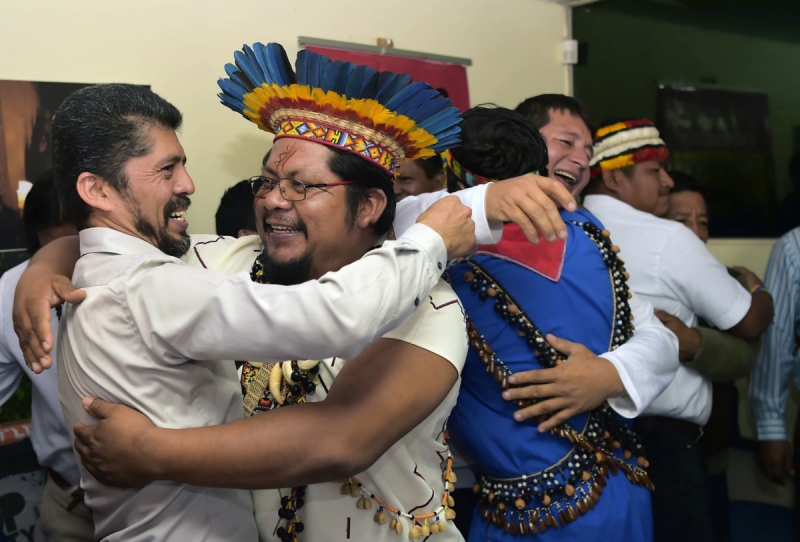 Court Rules, Chevron Must Pay for Environmental Damage in Ecuador.

Pablo Fajardo, lawyer for the victims of environmental damage caused during Texaco’s oil operations in the Ecuadoran Amazon (1964 to 1990), acquired by Chevron in 2001, celebrates with his clients, during a press conference in Quito, on July 11, 2018

In a resounding defeat for Chevron in a landmark pollution case, Ecuador’s Constitutional Court in a unanimous  decision rejected the oil major’s final appeal of a $9.5 billion pollution judgment that found the company deliberately dumped billions of gallons of toxic oil waste onto Indigenous lands in the Amazon rain forest. The decision was a total victory for the Indigenous groups that brought the case.

This decision is another huge victory for the people of Ecuador in their historic two-decade battle for environmental justice against the world’s worst corporate polluter and rogue operator,” said FDA leader Luis Yanza, who initiated the lawsuit against Chevron in U.S. federal court in 1993.

This is a wake up call for oil companies operating in Uganda and around the world to ensure respect and protection of the environment amidst oil activities (exploration and exploitation). It is also an eye opener for local communities in the Albertain Graben to hold irresponsible oil companies and corporate polluters accountable for their actions in case of any environmental damage in the Albertain Graben.

Read the Full details below;

The Constitutional Court of Ecuador has issued a long-awaited ruling in favor of those affected by the transnational oil company Chevron, which operated through its subsidiary Texaco in Ecuador between 1964 and 1990. The court rejected the protection action that the company filed in 2013.

In the 151-page ruling, the court denied Chevron’s claim of violation of constitutional rights. Chevron will now have to pay $9.5 billion for the repair and remediation of social and environmental damage that – according to audits and expert reports – were a result of oil company operations in the Amazonian provinces of Sucumbíos and Orellana.

The benchmark decision on the pollution case came after the court found that Chevron deliberately dumped billions of gallons of toxic oil waste. The waste was dumped in the Amazon rainforest on indigenous lands.

The news was announced by members of the Union of Affected by Petroleum Chevron (UDAPT) on July 11. UDAPT represents a group of indigenous people of the Cofan, Secoya and Kichwa nationalities, and settlers. UDAPT coordinator William Lucitanda said in an interview that it was a “historic day of the resistance of indigenous peoples in defense of collective rights.” According to Lucitanda, at least 30,000 people have been impacted.

Pablo Fajardo, who was affected by Chevron and became a lawyer on the case said in a telephone interview that the ruling “means a lot” to them. Fajardo said they can now focus on how to validate or approve it in other jurisdictions in order to execute and collect the funds.

“One argument put by Chevron (to not comply with the order) was to say that there was still a ruling, a pending procedure in Ecuador and that it was not appropriate to standardize the sentence outside because a ruling was pending,” Fajardo said.

Chevron Corporation has said that its assets in Ecuador are not enough to cover the amount ordered by the court. They unsuccessfully tried a similar approach in Argentina and Brazil. According to Fajardo, the argument used in both countries was that Chevron operates a subsidiary of the corporation (not the headquarters of Chevron), therefore the subsidiaries are not responsible for the debts of the corporation.

Ironically, two years ago Ecuador lost an arbitration against Texaco (later bought by Chevron) and had to pay $112 million dollars.

A longer version of this article appeared in Spanish on Mongabay Latam on July 13, 2018.