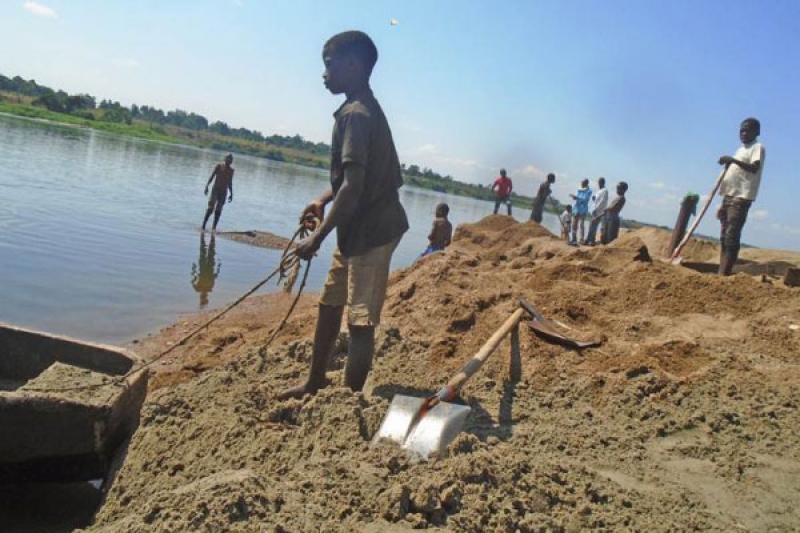 Boys mine sand at Nabuganyi Landing Site in Kayunga District on Saturday. PHOTO BY FRED MUZAALE

He was lured into sand mining at Nabuganyi Landing Site on the banks of River Nile in Busaana Sub-county by boys his age, who joined what seems a lucrative venture to earn a living.

“My elderly father is unemployed and told me to go and look for some work to fend for the family; that is how I ended up in sand mining,” Kasule reminisces.

He is now employed by men to scoop sand from the river for which he is paid a paltry Shs5,000 per trip of a canoe full of sand.
“My dream was to become a lawyer and I am still optimistic that after raising enough money, I will go back and achieve my dream,” the visibly shy Kasule says.

Kasule is among hundreds of pupils in the district who drop out of school to eke a living through sand mining, cutting sugar cane, scaring away birds from rice gardens, vending vegetables in towns, bricklaying and fishing.

This trend, the district leadership says, is worrying as it is depriving pupils of a brighter future.

The sand miners use canoes to go to sections of the river where the sand is found. They then plunge under the water from where they scoop the sand using spades and place it in the canoe.

When the canoe is full, they take it to river banks where it is off-loaded. A trip of river sand goes for Shs500,000.

Mr Ramadhan Simali Kayunga, an inspector of schools for Ntenjeru County, says every term, at least 70 pupils drop out of school in the area.

“We have tried to sensitise parents on the need to invest in their children’s education but our efforts have not yielded much as parents seem not to value education,” Mr Simali says.

He adds that village leaders and sub-county community development officers have also abandoned their role of ensuring that all parents take their children to school.

Mr Simali said out of the 7,700 candidates who sat last year’s Primary Leaving Examinations in the district, only 281 passed in Grade One while 1,677 failed. Also, 619 pupils registered but did not sit for the exams.

Despite being near Kampala city, the district has for the last two consecutive years been ranked by the Uganda National Examinations Board among the poor performers.

Mr David Ssentamu, the head teacher of Nabuganyi Church of Uganda Primary School, which is located about a kilometre from River Nile in Busaana Sub-county, says some learners report to class twice a month while others spend months without coming to school.

Months out of school

“They spend most of the time mining sand or fishing and only report when exams are about to begin,” Mr Ssentamu says, adding: “We are now used to it [pupils dodging lessons] because however much you sensitise parents, nothing changes. Nabuganyi C/U has an enrolment of about 400 learners but on average, only 250 attend school every day.”

Mr Collins Kafeero, an officer in the district gender office, says child labour, especially in the sand mining business, is a major challenge in the district, pointing out that at least 600 children are engaged in the trade in Kangulumira, Busaana and Kitimbwa sub-counties.

The Resident District Commissioner, Ms Rose Birungi, blames the problem on failure by the Ministry of Justice and Constitutional Affairs to approve the education ordinance enacted by the district council in 2014 to arrest parents whose children engage in child labour.

“We want to arrest parents whose children are involved in child labour but we have no law under which we can do this,” Ms Birungi notes.
She, however, adds that they plan to carry out operations in all sugar cane plantations and on the river banks to arrest children found working during school time.

Lucrative. Sand mining has in the past decades become a lucrative business due to the growing construction sector where it is used to make concrete.
Gazetted. Two months ago, government put sand, stones and murram under the category of minerals in the newly approved mining policy. Government believes this will end unregulated mining across the country.
Licence. Under the new policy, any one intending to venture into sand mining will be required to acquire a licence from the Ministry of Energy and Mineral Resources.
Fine. According to the new policy, anyone who will be caught engaging in sand mining without a licence will be fined Shs500,000 or jailed for one year, or both.
Concerns. Environmentalists say increasing sand mining in Lake Victoria and major swamps and rivers, saying excessive excavation of sand will spark off an ecological disaster.

Uganda has the highest school dropout rate in East Africa, according to a 2010 report by the United Nations Educational, Scientific and Cultural Organisation (UNESCO).
Last year, out of the 7,700 candidates who sat last year’s Primary Leaving Examinations in the district, only 281 passed in Grade One while 1,677 failed. Also, 619 pupils registered but did not sit for the exams.

Read the original article on Monitor.