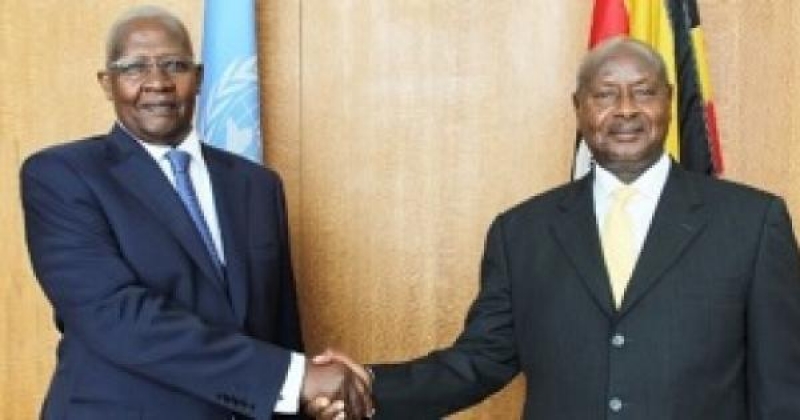 ‘Well done.’ Museveni meets Kutesa in his New York office when he was President of U.N. General Assembly

A former foreign minister of Senegal and a Chinese intermediary have been arrested for their role in bribing the President of Chad and Uganda’s foreign minister, the U.S. announced in an indictment unsealed Monday.

The bribes were allegedly for concessions in the energy industry in both Chad and Uganda for an unnamed Chinese oil company, according to the U.S. indictment unsealed by the Justice Department and posted on its website.

A payment of $2 million was allegedly paid to President Idriss Deby of Chad and $500,000 to Uganda’s foreign minister Sam Kutesa, the U.S. alleges. A joint business venture by the unnamed Chinese company with the “family businesses” of Kutesa and Museveni was also promised and both men received gifts, according to the U.S. indictment.

The scheme was hatched in New York in 2014 soon after Kutesa assumed his role as President of the United Nations General Assembly. The payment to Kutesa wasn’t made until his term ended and he returned to Uganda, the U.S. alleges.

The payment was disguised as a “donation” to a charity of Kutesa’s choice or a donation to help Gen. Museveni with his 2016 re-election campaign, the U.S. alleges. However, the payment was allegedly to gain favorable concessions for the Chinese oil company. The $500,000 wire transfer was made after the Ugandan election, the indictment states. The alleged bribe payment to Kutesa was wired to a bank account in Uganda that he designated.

International observers ruled that the election had not been free, fair, or credible.

Cheikh Tidiane Gadio, foreign minister of Senegal from 2000 to 2009, was arrested last Friday in New York and Ho was arrested Saturday. They were both charged with violations of the Foreign Corrupt Practices Act, international money laundering, and conspiracy to commit both.

The bribe money allegedly came from a “Shanghai-headquartered multibillion-dollar conglomerate that operates internationally in the energy and financial sectors” through an NGO operated by Ho and based in Hong Kong and Virginia, according to the indictment. The NGO was affiliated with the United Nations.

“This alleged scheme involved bribes at the highest levels of the governments of two nations,” said Acting Assistant Attorney General Kenneth A. Blanco. “The Criminal Division is committed to investigating and prosecuting corrupt individuals who put at risk a level playing field for corporate competitiveness, regardless of where they live or work.  Their bribes and corrupt acts hurt our economy and undermine confidence in the free marketplace.”

“Wiring almost a million dollars through New Yorks banking system in furtherance of their corrupt schemes, the defendants allegedly sought to generate business through bribes paid to the President of Chad and the Ugandan Foreign Minister,” said, Acting Manhattan U.S. Attorney Joon H. Kim. “As alleged, Ho’s Ugandan scheme was hatched in the halls of the United Nations in New York, when the country’s current Foreign Minister served as the President of the U.N. General Assembly, and then continued unabated upon his return to Uganda.  International bribery not only harms legitimate businesses and fair competition, but it also destroys public faith in the integrity of government.  And when this type of international corruption and bribery touches our shores and our financial system, as the alleged schemes did, federal criminal charges in an American court may very well be the end result.”

The F.B.I and the Internal Revenue Services were also involved in the investigation, according to the indictment.

The U.S. alleges in the indictment that the conspiracy between Ho and Kutesa started in October 2014, at the U.N. headquarters, soon after Kutesa started his term as General Assembly President. The alleged bribes were not paid until 2016, when Kutesa was back in Uganda.

Kutesa has been involved in several alleged corruption scandals. At the time he became President of the General Assembly, The Black Star Newsreported that his private company in Uganda, ENHAS, had earned about $30 million from a U.N. contract. He had never disclosed to the U.N. that he owned the company when ENHAS was awarded the contract. When The Black Star News questioned U.N. officials including then Secretary General Ban Ki-Moon, the U.N. disabled the links that displayed ENHAS’s invoices on its website.

The U.S. is the largest contributor to the United Nations.

The Black Star News was unable to get comments this morning from both the Permanent Missions of Uganda and Chad to the United Nations.