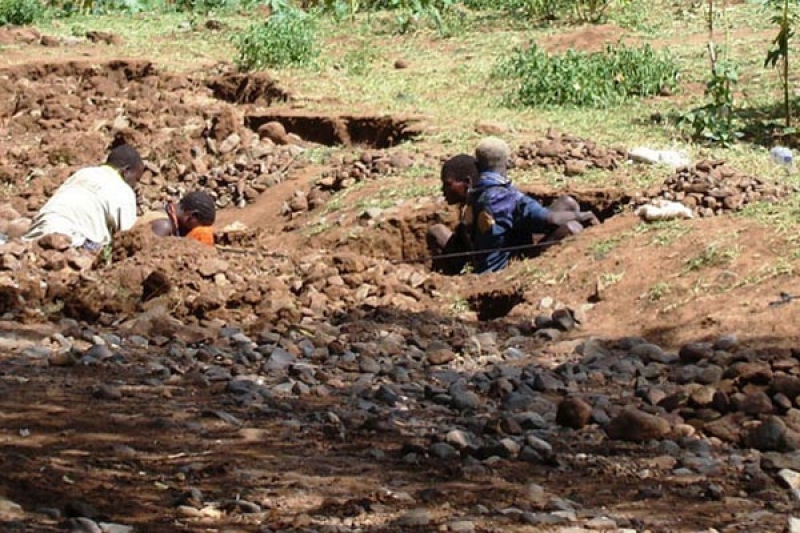 Small scale gold mining in Karamoja. Such activities are supporting the growth of the mining industry.

Kampala. Gold in 2015/16 became Uganda’s second largest export product after coffee but the royalties paid to government don’t seem to reflect that growth. Uganda exported gold valued almost Shs700 billion or about 5,316kgs in 2015/16 according to statistics from Bank of Uganda (BoU).

However, in the Auditor General’s report for 2015/16, there was collection royalty, yet exports were much higher. In fact, the royalties collected were only Shs360m instead of Shs41.88 billion.
“Accordingly, government should have collected between Shs6.98b and Shs34.9b in royalties using the applicable rates of 1 per cent and 5 per cent for the imported or locally mined gold respectively,” the report reads, in part.
Uganda has never exported gold that is valued at that much and at the moment the capacity to produce such quantities is still considered limited. Uganda is supposed to be getting royalties from any gold that is imported and exported, according to Mining Act 2003. The concern raised by the auditor is because of the conflicting figures issued by the Ministry of Energy on one hand, and then Uganda Revenue Authority (URA) on the other.

“During the financial year 2015/16, I noted that the management assessed royalty and awarded export permits for only 93kgs of gold worth Shs11.8b. However, collaborative reports from the Customs and Excise Department of Uganda Revenue Authority indicated that 5,316 kgs of gold had been exported with a total value of Shs698b,” the report reads.
That means some gold was exported and royalties were never paid.
Accordingly, the Mining Act reveals that “Any person who exports any mineral from Uganda without complying with the requirements of subsection (1) of this section commits an offence and is liable, on conviction, to a fine of not less than two hundred and fifty currency points or to imprisonment for a term of not less than two years, or both.” There has been no action taken against anyone violating this, according to the Auditor General.

Baffling exports
Of particular concern is the source of the gold.
Gold quantities that are produced in Uganda are still unknown. Uganda’s gold production is mostly done by artisanal miners and small-scale miners. According to Dr Adam Mugume, the executive director research at BoU, says they also don’t have records of gold in such large quantities being imported into the country.
“All of a sudden we got God’s blessing and we started exporting gold. I acknowledge that actually, that is one of the main challenges that we have because we don’t see where the gold is coming from. Because we do not see it in imports but we are seeing it in exports,” he said during the Stanbic Uganda Economic Outlook Forum last Tuesday.
In 2016, Uganda’s exports grew by 1 per cent on account of the increase in gold exports.