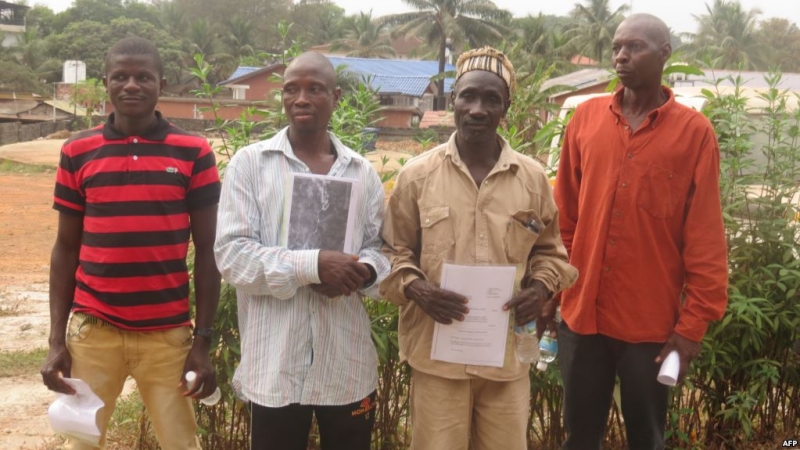 Left to right, Manso Turay, James Conteh, Father Kargbo, Mohamed Barrie pose outside the Radisson hotel in Freetown on Feb. 5, 2018, before a hearing where a British court heard testimony of the alleged complicity of a British mining company in police brutality, including rape.

Hearings have wrapped in Sierra Leone from claimants accusing mining company Tonkolili Iron Ore of human rights abuses. The allegations against the company, formerly a subsidiary of African Minerals Limited (AML), cover incidents in 2010 and 2012 in the northern region of Tonkolili in Sierra Leone.

Kelly Conteh, one of the witnesses, knows he is lucky to be alive. He was one of the people shot in a police crackdown in 2012 on the outskirts of Bumbuna where AML was based. The company’s workers were protesting low wages and working conditions.

Conteh was not one of them. He got caught in the thick of it trying to get to work. He said a police officer shot him in the back of the head. He blacked out. Wen he woke up, he was in a clinic.

Conteh said he saw many injured people coming in and he also saw the body of Musu Conteh, who had been shot when police used live ammunition to stop the protest.

He said when he saw she was dead, he cried and just kept thinking that this lady was innocent. “We were all innocent,” he thought, “and police just came to hurt us.”

Since the 2012 incident, Conteh has moved from the Bumbuna area and started a new life. But he said he cannot find steady work due to his injuries and still suffers from headaches and nightmares from the trauma.

Another incident in 2010 brings painful memories for witnesses like Ali Kargbo. He lost his brother during a village protest against an alleged land grab by the mining company. According to Human Rights Watch, hundreds of families were forced off their land with little consultation with villagers to make way for the mine.

Kargbo said neither he nor his brother were part of the protest, but his brother allegedly was beaten and arrested, and died from his injuries.

“I was feeling very sad, everyday I am crying, I have only one brother,” he lamented. “I was so worried when he was in the prison. And he was paying my school fees. And after the death of my brother, I could not pursue my education.”

Thirty-three witnesses testified in Freetown. Those who are claimants are seeking monetary compensation. Many witnesses were denied visas to travel to London, where the bulk of the trial is taking place in London.

It’s believed this is the first time a British high court has traveled overseas where human rights abuses are alleged to have taken place by a UK-based company, according to Leigh Day, the law firm representing the local residents filing the lawsuit.

The Human Rights Commission of Sierra Leone, which investigated both the 2010 and 2012 incidents, also testified at the hearings in Freetown. Abdulai Yollah Bangura, who is with the Commission, said the fact the British trial can have hearings in Freetown could be a game changer for how mining companies are dealt with when it comes to allegations of abuse outside their country.

“It’s a starting point at least,” he said, “to ensure that companies are actually put on their toes whenever they are doing their operations so that they don’t just do things the way they want. … Whether they have political influence, or whatever influence they can use in their operations against our poor people, I think this is the beginning of a turning point in the history of business operations in our country.”

Even though this is a first step, communities are still affected by the work of mining operations in the Tonkolili area. Three class action lawsuits were filed this week against a Chinese company, also an AML subsidiary and owner of a controlling interest.

Sonkita Conteh, director of Namati, a legal empowerment organization filing the lawsuits, said people are reporting pollution of swamplands and streams and insufficient farming land due to mining activities.

“What we have is a situation where swamps that were used to cultivate crops throughout the season have now been covered by all sludge and tailings,” he said. “it’s impossible practically to cultivate anymore. …The crops that were there were killed by both the ore itself and the chemicals mixed with the ore. And water sources the community relied on have also been polluted.”

No comments were available from the mining subsidiaries. A final ruling on the current trial is expected in April.