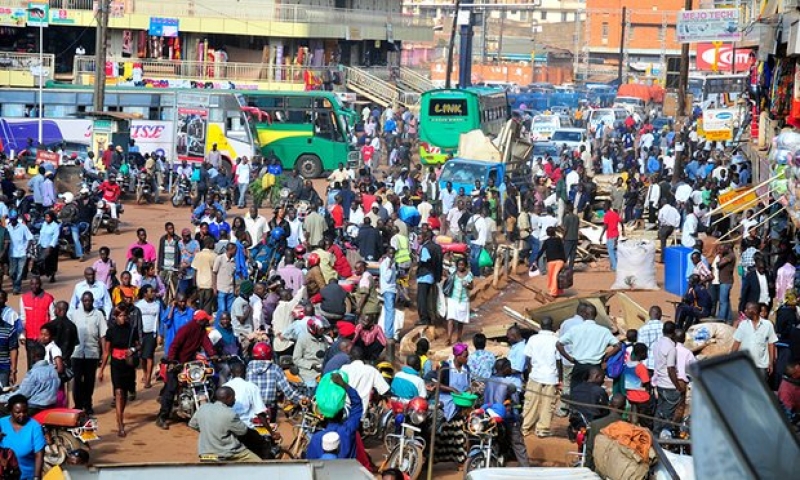 A bus terminal in Kampala. Poor infrastructure hinders growth, but Uganda risks not being able to service its debts. Photograph: Ronald Kabuubi/AP

The country has tied loans for infrastructure to future oil revenues, but experts fear that such borrowing could trigger a financial crisis In a hamlet, 7km south-west of Uganda’s capital Kampala, a group of cyclists rests under the shade of a flyover under construction. They watch as heavy-load vehicles full of building materials race past. “I can’t wait to ride on this road when it’s complete,” says one of the group.

The flyover forms part of the 51km Kampala-Entebbe espressway, linking the city and Entebbe international airport. It is costing $476m (£383m) and is due to be finished in 2018, one of the major infrastructure projects taking shape in east Africa’s third largest economy.

Another is the 600MW dam being built on the Nile in Karuma, 264km north of the capital, for an expected cost of up to $1.65bn (£1.33bn).Meanwhile, discussions are continuing about the construction of a $3.2bn railway from Kampala to the Kenyan port of Mombasa, 1,152km to the east. And Uganda will soon begin construction of a $4bn refinery and a $3.5bn crude oil pipeline to support its nascent oil and gas sector.

All these projects have one thing in common: they depend on borrowed money, mainly from China.

The infrastructure boom has increased Uganda’s exposure to debt and there are fears the country could be headed for a financial crisis.

Enock Nyorekwa, an infrastructure economist for the EU delegation in Kampala, says: “The [debt] risks have become more pronounced. The question remains whether [this kind of] debt is generating the growth or dividends.”

The country’s external debt has grown rapidly. It was estimated at $10.7bn at the end October, according to the Bank of Uganda.

While the International Monetary Fund (IMF) says Uganda remains at low risk of debt distress (pdf), it acknowledges the country is on a “grey” list of those likely to be overburdened by debt.

Kampala has pegged much of the borrowing for projects on the prospect of future oil revenues. The country has confirmed 6.5bn barrels of oil reserves with up to 1.7bn commercially viable. Production is expected by 2020 at the earliest. Yet a fall in the price of oil since 2014 raises uncertainty for prospecting states like Uganda.

The experience of Ghana, which discovered oil in 2007 and went on a spending spree, suggests the need for restraint. In 2015, Ghana agreed to a $1bn IMF bailout so it could service its debts.

“What I am afraid of is that public debt may crowd out service delivery. We may not be able to provide services [in] order to repay debt,” says Paul Lakuma, a research fellow with the Kampala-based Economic Policy Research Centre.

Only 20% of Uganda’s 36 million people have access to electricity, and basics such as access to clean water are a rarity, according to the 2014 national census. As many as 24 million Ugandans (68%) rely on subsistence farming.

At least 12% of Uganda’s budget in financial year 2017-18 will go to servicing debt. This is more than key sectors such as health, education and agriculture will receive.

The poor state of infrastructure in sub-Saharan Africa – electricity, water, roads and railway – cuts national economic growth by 2% to 3% every year, according to the World Bank. It reduces productivity and leaves millions of people poor.

Many countries are borrowing to solve these constraints. Between 2010 and 2016, at least a dozen sub-Saharan African countries, including Tanzania, Namibia, Rwanda, Kenya and Ethiopia, issued sovereign bonds to fund infrastructure.

Kenya’s public debt has reached at least 52.8% of GDP and there are warnings that it is getting out of hand.

Last year, the UN warned that high borrowing by African countries could trigger debt crises like those seen in the 1980s and 1990s

On her visit to Uganda in January, the IMF’s managing director, Christine Lagarde, said mobilising more domestic revenue was key to avoid falling into debt distress. “Relying on borrowing alone to finance infrastructure would be unworkable because debt would become too high. More revenue from taxes needs to be mobilised,” Lagarde said.

Uganda was a beneficiary of debt relief under the IMF and World Bank’s heavily indebted poor countries initiative in 2000.

Yet despite debt distress fears mounting, half of Uganda’s borrowed funds had not been disbursed by the end of October. This means the country continues to borrow money without proper plans of when and where to spend it.

In September, the World Bank suspended new lending to the country. It said: “Ugandan authorities [must] address the outstanding performance issues in the [debt] portfolio, including delays in project effectiveness, weaknesses in safeguards monitoring and enforcement, and low disbursement.”

In an earlier assessment of Uganda’s investment strategy, the Bank said the country had not been getting value for money on investments on most public projects over the past decade. It found Uganda’s projects were characterised by “endemic delays in implementation, cost overruns, and corruption means that sometimes projects come in at twice the original cost”.

The Bank added: “For every shilling invested in the development of Uganda’s infrastructure, less than a shilling (about 70%) of economic activity has been generated.”

The Kampala-Entebbe expressway may add glamour to the changing face of the capital, but the benefits may not outweigh the heavy costs.