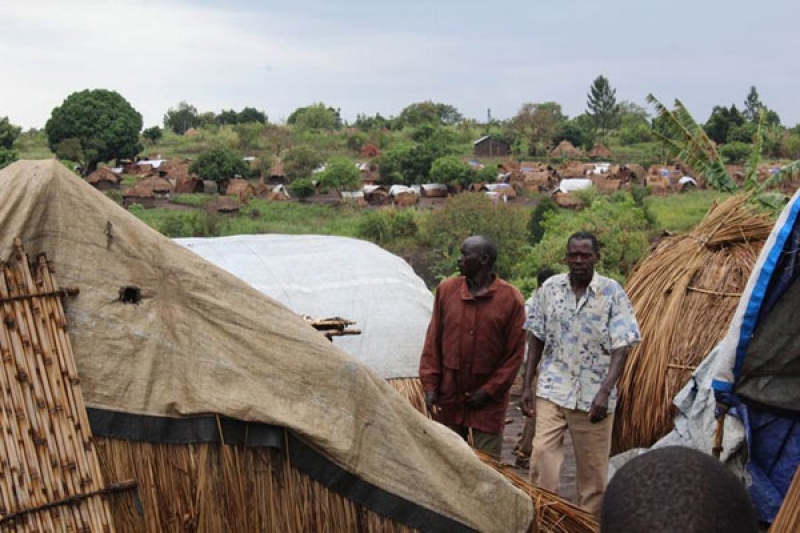 Displaced. Residents in a camp in Hoima District following eviction from a piece of land where a company plans to set up an oil waste plant. PHOTO BY FRANCIS MUGERWA

KABAROLE. The discovery of commercially viable oil deposits in the Albertine basin in western Uganda excited many Ugandans.
It is estimated that Uganda will earn between $2 billion and $3 billion per year when commercial oil production begins.

Government officials, including President Museveni, have promised that the petroleum revenues will be invested in infrastructural projects and social services aimed at uplifting people out of poverty.
In readiness to extract this valuable resource from the ground, government has commenced construction of 10 critical oil roads. Equally, there is an ongoing survey for an East African oil pipeline and feeder pipelines that will transport crude oil from the wells to the refinery. Construction work is expected to commence this year.

The construction of an international airport is also underway in Buseruka Sub-county, Hoima District, in an area zoned for the refinery. After concluding the first phase of oil exploration in the Albertine basin, where 6.5 billion barrels of crude oil have been confirmed, there are ongoing studies and other processes aimed at kick starting commercial oil production by 2020.

“It is our hope and desire that the infrastructural developments, which are being implemented in Bunyoro Sub-region, will improve on the welfare of our people. As a kingdom, we are mobilising our people to tap the social-economic opportunities of these infrastructural projects,” says Mr Andrew Byakutaga, the Bunyoro Kingdom prime minister.

The Omukama, Dr Solomon Gafabusa Iguru, has appointed oil professionals in his administration, among them Dr Kabagambe Kaliisa, the former permanent secretary in the Energy ministry, who has been appointed the kingdom’s royal commissioner in-charge of oil.
However, as Uganda moves closer to becoming an oil producing state, the mixed impacts of the oil industry are a reality for communities hosting the petroleum resource.

Early last month, Mr Byakutaga told President Museveni that his people were finding it difficult to get jobs and businesses in the oil industry and in the infrastructural projects.
Hoima District chairman Kadiri Kirungi says the expectations by the local people to get jobs accruing from the oil industry were high since the construction of the airport started.
But the format of the recruitment process was not clear, with contractors bringing in workers from other parts of the country to do jobs that area residents can handle.

“There is a need for locals to benefit from the airport project. If the project ends without creating any economic impact in Hoima District, then it will be a disservice to our local people,” Mr Kirungi notes.
Mr Francis Kyaligonza, the leader of more than 500 youth, who are pushing for an equal share of jobs at the Hoima airport, in a February 13 letter to the Inspector General of Police, notified companies constructing the airport not to discriminate against the locals when it comes to jobs.

“It is against the said background that we notify you over the same and request for protection in terms of security personnel during the intended demonstration scheduled for February 20, starting at 9am at Hoima Boma ground,” Mr Kyaligonza’s letter read in part.
Local leaders persuaded them to halt the demonstration in a bid to give room for the leaders to address their concerns.

On February 21, Bunyoro Kingdom officials, government ministers hailing from the sub-region and MPs who met SBC Uganda, the contractor for the airport, agreed to suspend recruitment process until it was streamlined.
“It is the desire of government oil projects to succeed. But the success cannot be achieved when local communities are sidelined or marginalised. We need a win-win situation for the contractors, government and the citizens,” said Mr Ernest Kiiza, the Bunyoro Affairs minister, who chaired the meeting between local leaders and airport contractors.

Upcoming projects
During the oil production preparation phase, Dr Kaliisa, also a senior presidential advisor on oil and gas, says more than 500 wells will be drilled.
He says the planned construction of oil pipelines, central processing facilities, the oil refinery, an airport and the roads are expected to attract a total investment worth more than $12 billion in the Albertine region.
He advises that the social-economic, environmental and engineering aspects of each project are undertaken in an inclusive and sustainable manner.

Driven by the desire to tap into the lucrative looming oil business, area residents in 2012 formed the Bunyoro Business Club. However, with more than 70 companies registered under the club, only a handful succeeded in tapping into the businesses during the oil exploration phase.
Others are dormant because they lost hope in getting contracts in the oil sector, says Mr Samuel Mugisa, the club chairperson.

Nevertheless, 30 companies from the sub-region are registered in the national suppliers’ data base that is run by the Petroleum Authority of Uganda (PAU).
Mr Mugisa hopes that with the upcoming commercial oil production, the petrol dollars will increase in the pockets of the communities hosting the oil resource.

Speaking at the launch of the East African crude oil pipeline project in November last year, the Energy ministry permanent secretary, Mr Robert Kasande, explained that during the oil exploration phase, $3.2b was spent on the purchase of goods and services.
He added that of this, about $900m was spent on contracts to local suppliers.
“In the next three years, we expect expenditure of not less than $15b during the oil development stage. Government is doing all it can to sensitise our people, build their capacities so that if only 40 per cent of the contracts are given to Ugandans, they will earn about $6b,” Mr Kasande said.

Industries, warehouses and new service providers have since mushroomed in the sub-region. The value of land has also appreciated, leading to more than land conflicts and controversial land evictions.
The investors are positioning themselves to provide goods and services to oil workers and the increasing population in the sub-region. Mr Simon Kinene Agaba, the Buliisa District chairperson, says the oil industry requires higher skills and capacities which many locals do not have.

Mr Kinene, who is also the chairperson of the Albertine Graben Oil and Gas Districts Association, which unites districts in the oil region, says there is a need for communities to learn from other oil producing states.

The Buliisa District community development officer, Mr Bernard Barugahara, adds that more sensitisation is required for communities on matters of financial management.
He says when oil companies compensated families whose properties were affected during the oil exploration phase, some beneficiaries became wild.

“Some men abandoned their children and opted to marry new wives. People are repeating the same mistakes. There are people washing their motorcycles with beer. Others are hiring bouncers and prostitutes have come into the district. We need to mitigate these social challenges,” Mr Barugahara says.